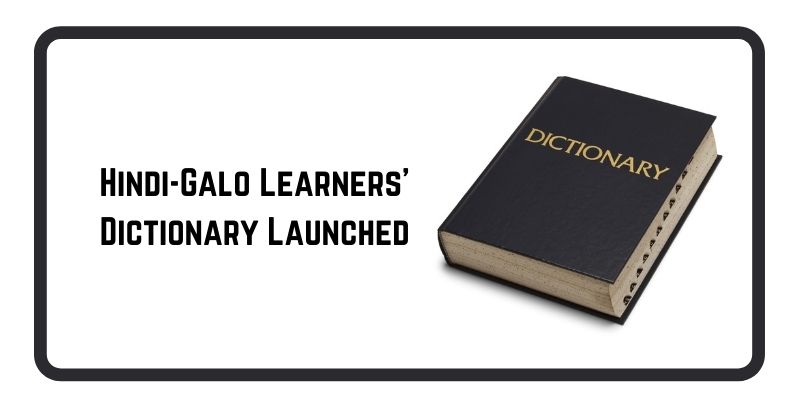 Although a lot of people in Arunachal Pradesh speak Hindi language, the native language of Galo people is still their own language which is aptly called ‘Galo’. It is a Sino-Tibetan language of the Tani group, spoken by the Galo people. Although the precise position within Tani is not yet certain, according to the locals, the central location in the Tani area and that may be a reason that there are strong effects of intra-Tani contacts on the development of Tani languages for that matter.

When it comes to translation, dictionaries are the right way to look into. The latest addition of the Hindi-Galo Learners’ dictionary which has been published by Kendriya Hindi Sansthan i.e. Central Institute of Hindi, Agra is definitely going to play a vital role in helping out the people. In a recent program the dictionary was released at Rono Hills by Dr. Tai Nyori who has great experience working as registrar and controller of examination of Rajiv Gandhi University.

Since, the entire book release was held in the presence of Gomar Basar, general secretary, Galo Welfare Society on the 6th of December, the last year, people who are aware of it believe that the dictionary is a great achievement for Galo people. Nonetheless, ad the dictionary has been compiled by a team comprising assistant professors Dr. Tadam Ruti and Dr. Doge Ngomdir, and research scholars Jumnu Kamdak, Rebom Belo, Binnu Lingo, and Genu Ingo, it will have a native linguist impact all over it.

Finding out right way for communication

Despite the fact that Hindi language is a lingua-franca in Arunachal Pradesh, Galo language is being spoken by a large number of locals. With the help of the dictionary it would become easy for speakers of Galo language to communicate well with Hindi speakers. Similarly, Hindi speakers would now be able to communicate competitively with Galo people as they would understand the language and terms specific to the locals of Arunachal Pradesh.

The launch of the new dictionary is historic for the Galo community which has though openly embraced Hindi does not want to lose its identity and keep the language live. It is quite evident that the Hindi-Galo dictionary will also uphold the importance of the Hindi language and the role of the dictionary in preserving the local languages by paying respect to the local language.

Why is Galo Language Important?

Any language is important for its people for it is their identity and so is Galo for the people of Arunachal Pradesh. Being largely synthetic and agglutinating language, it has two primary lexical tones e.g. High and Low. These tones reflect two Proto-Tani syllable tones; however, in modern Galo, the surface Tone-Bearing Unit is the usually polysyllabic phonological word. Helping out the users with the finest details, the Hindi-Galo dictionary will also teach on the uses and functionality features.

Trust only native for Russian Translation Services for your documents How much should a translation cost?